- December 17, 2009
World eagerly awaits for a treaty that would address to safeguard and protect the environment and hence the climate, greenpeace and others are on a 'jihad' to make sure it happens. Despite the dignitaries coming together for this cause, people who are involved still are not expecting  a sensible outcome but what they are hoping for is a miracle to happen. Has the matter of things been degraded to such a level that only miracles can solve the issue?

Lets look at the issue at hand here, in a pictorial way 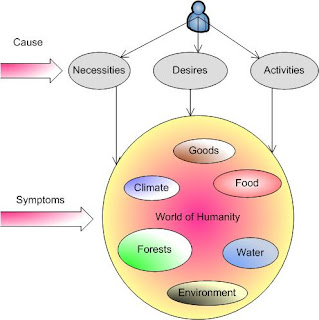 We all human beings are driven by our needs, desires and other activities which impact the world we live in, so there is your cause and there is your effect.

Today we are driven by our own selfish desires, which unfortunately do not care much about the impact that it makes, like shown below. 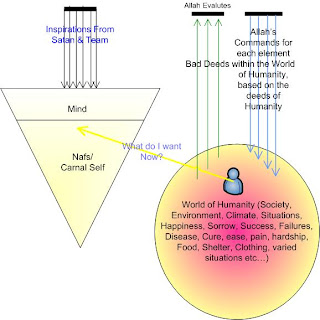 Today we are driven by our selfish goals, we are not ready to make some sacrifices and be a little selfless in our matters to reach a consensus for general well being, and yet we expect a miracle, how can it happen as our creator says

30:41. Mischief has appeared on land and sea because of (the meed) that the hands of men have earned, that ((Allah)) may give them a taste of some of their deeds: in order that they may turn back (from Evil).

We keep thinking "What do I need right now?", for which we look deep into our own self and seek out our selfish desires which we think would make us happy. Despite this we expect a miracle could it happen???

Lets look a bit below and think. 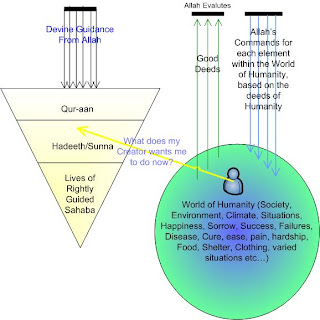 Now if we were to look at things from a different perspective, and ask this question to ourself "what does my creator want from me right now? which would bring benefit to all?". When the answer is provided from the source of right guidance you perform an internal 'jihad' to suppress your selfish ends and be selfless in your deeds. Those deeds would be recognized by Allah and he would sent down his commands, his miracle for us.

Without changing our ways and expecting for a miracle? come on welfare for humanity is not cheap.