- December 31, 2009
As the Blue moon walks us into 2010, its a good time to reflect the past year, but what exactly is the blue moon? lets have the reflection first then the blue moon ... 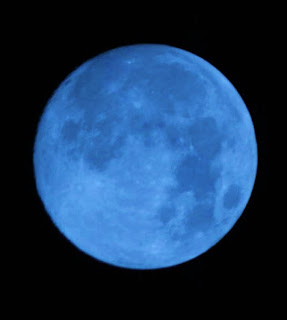 2009, a year has past, new lessons learned, new experiences acquired, the world existed before I was born and so will it be when I would be laid to rest.
World does not need me for it to go on, for that there is Allah, then in this world no one would be left off without being tried and tested, would i be an exception? Nope sir that is not an option.

Amazing the way Allah has designed the test, so dynamic with varying conditions there is no point in life when he is not watching you, the angels recording you, I know we have no choice to opt out of this test.

We have a local myth here of a very generous king, he was known as Mahabali, he was so generous that even mythological 'gods' were jealous. So to teach this generous king a lesson Vamana asked for three feet of land and the king accepted, Vamana measured the entire world for the first two feets, for the third feet of land which the king did not have he offered his own head.

Again Mr, aren't you a muslim and narrating a mythological story!!!
Well yeah, I understand the culture of my neighbors, very much within the limits of Islam, thank you.

So I was saying, you would be tested, who knows what me have to offer???

So let me tell something from MUSLIM history just for you, there was a jew priest who wanted to test if Prophet Muhammed(SAWS) was really the one who claimed to be? In his scriptures it is mentioned that his forbearance and mercy would precede his anger.

Again Mr, where is the blue moon thingy?
Hold on am coming to that, shall i continue ...

The jew priest lend some money to the prophet, and before the lapse date of the debt to be paid back the Jew for testing the prophet showed anger, abused him and harshly demanded his money back. Hazrath Umar(RA) could not tolerate this sight and he unsheathed his sword and spoke rash words. To this prophet requested Umar(RA) to arrange the money as he himself did not have it at the time, and also asked Umar to pay extra for being rash to the priest. The priest got his sign.

Again Mr, what is the point?
Well we are the followers of the prophet, we would also be tested in similar ways and understand that the one actually testing us is ALLAH.
In 2010?
Year is immaterial !!!, and besides we have a lot of different new years just in this part of the world :)

So Mr, the blue moon?

Oh blue moon, see the calender we use is not lunar calendar and our calendar we use is really messed up, with 28,30,31 days. Now the moon cycle happens in approximately thirty days so there are some months where you would spot two New Moons.

And this month and today night you can see the second full moon, and also there is an extra bonanza of lunar eclipse too today. We claim to have all the power and technology, can we cause an eclipse?

By the way how big are you?
Why Mr? am just an average Human
Compare all the humans put together on one side of the balance and moon on the other side from a size perspective, dont you think one who has power to eclipse the moon so easily can do the same with one and sundry?
Thought Provoking Mr 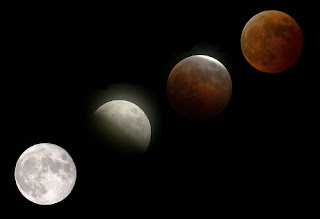 So Mr. but is there much of NIRVANA or NAJAAH into blue moon?

Why not? There is always NIRVANA or NAJAAH provided every sign you see makes you think and act on the right way.

You see skipper!!!, what ever reminds you that one day you are going to stand in front of your LORD and answer to him is worth noting in this world.
There is a Hadeeth which says 'Hasibu, Qabla an thuhasabu', "Take an account of yourself before you are taken to account for".
Imagine the grand setting of the world, HE is ensuring that you come good when your appointment with HIM is due.

OK Mr, got the point
Really??? if we really have ... would we be still living like this  ....?
So Mr you are not wishing me happy new year?
I wish you happiness always, not just on the new years eve :),And If i dont I fail in my test, and besides I am not what you call a party friendly person. I like gatherings for good causes.

Note from elders, before you go to sleep do the following things
1. Take an account of entire days deeds, if you find them good ask Allah to accept them, and you will find a lot of mistakes for which seek forgiveness
2. See if your heart has any rancor, enmity or hatred for any one, if you have then clear it, as heart is the abode of the beloved.
Magazine Spiritual