- November 27, 2009
Would you be intimate with some one, so intimate that to hear their name you would sacrifice all your wealth?

Would you be so understanding about your companion intimate that even upon signs you would care enough to satisfy the need of the moment.

That is the biography of Prophet Ibrahim peace be upon him, and that is the plot for the Eid.
The only one who knows the innermost matters of a persons heart is Allah. When Allah decided to make an affluent youth his khaleel (intimate friend),the angels were surprised. Why wouldnt they be?There is not even a speck of space where the angels are not performing devotional gestures.Angels are infact very close to Allah.They are so pure and subservient, always willing to heed to Allah's commands.And they are clean from any form of disobedience.The angel most dearest to Allah is the archangel,Jibreel(Gabriel)( peace be on him). He is also know as roohul qudoos(holy spirit).So Allah gave him a chance to test his chosen one.

With Allah's permission angel took the form of an old man and a believer.The old man went near the gates of the palacial home of prophet Ibrahim(AS).He was standing in the balcony looking over the works happening there.From below near the gate the old man uttered "subbuhun quddusun rabbul malaikati warruh"(holy and most holy is the lord of angels and spirits). Prophet Ibrahim(AS) was so attracted to these words which he had never heard before,the words that mention about his intimate companion that he fell into a trance and running down the stairs he rushed towards the gate.He searched frantically for the person who has spoken so beautifully regarding his lord.He found the old man and requested:

When Ibrahim (AS) was very old he had a son Ismail.As a father his love for his son was obvious.But one night when he dreamt about sacrifising his dear son,he felt that his love for his son is surpassing his love for Allah.And he felt that the dream was an indication. In order to satisfy his heart that his love for Allah is greater and these wordly love is nothing compared to it,he went to sacrifice his dear son ismail.However as he was about to put the knife over his son's neck, on Allah's command Gibreel(AS) gifted Ibrahim(AS) with a sheep  which would suffice as his sacrifice.

Today whoever perfoms qubani remembers this incident. But if we look into our hearts is our love for Allah as great as that of Prophet Ibrahim(AS)? Today we sacrifice a goat to complete this way of Prophet Ibrahim(AS) as shown by our beloved prophet Muhammed (SAWS). The recommended way is to feed the livestock for some months and love and care for it like a family member. The sacrifice it on this day fulfilling the prescribed ways of our nabi (SAWS).

It is true that poors would get a chance to relish on the day of Eid, but more than that the qurbani is a practice to keep a check on the things we are associated with and to see where it stands compared to love and devotion for Allah. 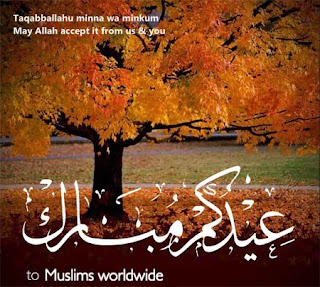 This day we celebrate Eid, for the efforts of Humankind to build relationships that matters, forever.
Spiritual