- January 15, 2010
"It is important for western countries to avoid impeding Muslim citizen from practicing religion as they see fit, for example by dictating what clothes a Muslim women should wear. We can’t disguise hostility towards any religion behind the pretense of liberalism."
-Barack Obama

Assume Mr X's belongs to religion A, and Z's belong to religion B. with this in mind consider the following scenarios and their corresponding verdicts (of a liberal free thinker ;) ) 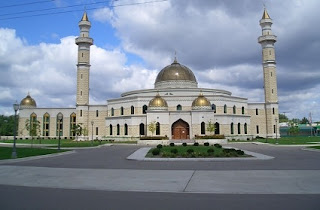 I - One Z1 after learning about Religion B understands the the etiquette of dressing and follows it.

II - One Z2 forces Z1 on a dress code which Z1 does not like to adhere to.

III - One X1 forces Z1 on a dress code which Z1 does not like to adhere to even after knowing that Z1 would be forced to break the religious code Z1 believes in,

Verdict :: Mr X1- NOT OK + NOT OK (reason being one Z1 is being forced to wear something Z1 does not like plus X1 forces Z1 to break the etiquette of Religion)

Lot is being said about the religious status of the Burqa, a lot of folks commenting 'I think its like this', 'this is what i understand'.

okay fine, lets also see what the experts say in this regard.

Well I am not an  expert so read this here
Jazakallah Mlv Zakariya Bin Yahya for providing the fatwa link.