Space, Time, Matter And The Beginning 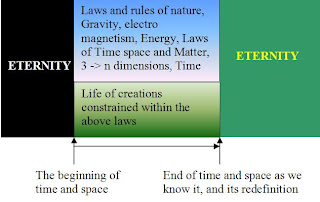 Imagine a plane within a time space continuum where the dimension of time remains constant or non variable. Can you and I imagine such a state? The concepts of speed and movement cease to exist as it is relative to time, would things come to a stand still? Imagine pressing pause on your DVD. Even though the time within the screen freezes time for us continues, if our time also freezes and it does not change or if it is paused by some one who can, just imagine what would such a state be?, even the thoughts are paused? Can you imagine? Is our brain built to imagine and understand the wide stretch of implications of such a state?

Every matter is characterized by mass, shape, volume, area defined and identified within three dimensions. From a human perspective the entire life of an Ant is spent in two dimensions the movement is left, right, front or back. For an Ant a third dimension does not make any sense as it does not need one. For us we have the directions Up and Down apart from the four directions of Ant, it does not make any sense for an Ant to jump up and down. Now when we look at human beings far away from earth the Up and Down dimension for the humans becomes negligible dimensions reduces down to four movements just like that of Ant. The dimensions and degree of freedom is relative.

This world was created with not just Flora and Fauna but Matter, Time, Space, Dimensions, Energy, Mass, magnetism, gravity and the laws that bind them. So the Creator is the creator of all of them not just of Matter, Flora and Fauna. In thermodynamics we define a system as an area selected for study. Our creator has enclosed us within a system of his creation, the laws, properties and parameters; all of these bind us; those within the system. For our creator, the creator of the entire system he is free from all such bindings, of Matter, Mass, Time, Dimension, Gravity, Motion. He is pure from being measured, he is pure from being constrained, and he is pure from any blame or short comings. As all these parameters are for his creations.

Fate of creations is not influenced by creations that decision is only with our creator whom I call Allah (the nearest translation for Allah is- the one and only god, he is not the proprietary copy right of Muslims but is for all that has been created by him). To re phrase this, no creation can influence the success or failure of another creation which is only dependant on the decision of our creator. This is so because each creation depends on the creator to fulfill their needs. Take for example sleep, every living creature needs sleep, being rich or poor, black or white, man or animal, does not help or hinder getting sleep. We look at some people on the street who sleep on footpath, we also know of people who cannot sleep in soft beddings and air conditioned rooms unless they have pills. Some who cannot sleep imagining of loss of any thing, some who sleeps even though even if they do not have anything? Why? He gives us sleep.

In his book he says in such a simple term about himself:-” He is the most pure and the most exalted” and about his presence:-“My servants ask thee (Prophet) concerning me, tell them I am very near to them”. He is has put it in such a beautiful way that any normal person of normal intelligence can know about him. Unfortunately for us to understand this look at the road we had to take. He clarifies here that he is above all constraints and limitations or any X-Y-Z-T co-ordinates.

Hazrath Ali (Allah be pleased with him) was about to embark on an expedition, there was a famous accepted astrologer at the time; he said to Hazrath Ali “If you start at this time your mission will fail”. Hazrath Ali said “we will set out immediately“. He succeeded in his endeavor and then said “All praise to him who has saved my belief in him”. Here the point to not is not to prove the astrologer wrong but to reaffirm his belief that creations does not influence the success or failure but ultimately it is our creators decision. This leads us to a world of vastness and hope, where we rely on some one who loves us, cares for us, takes care of us to influence and decide on our final state of affairs. He is our creator the most pure, the most exalted and he is not far but he is most near.
Spiritual